Click here to read this post in Spanish!
Haga clic aquí para leer este blog en español!
Late one spring night in 1887 in the Kakhyen Hills of Burma, 35-year-old Italian explorer Leonardo Fea crested a karst outcrop and entered a bamboo thicket. He barely noticed the rain, because before him lay a two-foot long snake of indescribable beauty. It was shiny, dark purplish-black and marked with thin, widely-spaced neon orange bands so bright they almost  looked white. The head bore a striking symmetrical pattern of orange, gold, and black. When Fea picked the snake up, he saw that it had a plain purple belly. It appeared to be a harmless colubrid, and luckily for Fea, he wasn't bitten, so he had no opportunity to find out that it wasn't.

Fea was among the many European explorers and natural historians who were pouring into the newly-annexed nation of Burma, whose cultural roots date back to the 2nd century BCE. He collected thousands of vertebrates there for the Genoa Civic Museum, but perhaps none so unique or amazing as that snake. When Belgian-British herpetologist George Boulenger received a loan of Fea's reptiles from the museum, he declared of the single specimen "I may well say that Azemiops is the most interesting ophiological discovery made since that of Dinodipsas [Causus]1". Boulenger described it as a new genus and species in his 1888 report on Fea's expedition, writing "it affords me great pleasure to connect with [this snake] the name of the courageous and highly successful explorer to whom science is indebted for this and so many other additions." Azemiops feae was the first species named for Fea, who was soon to also receive the honors of an eponymous petrel, tree rat, and muntjac, collected with his "untiring zeal" in southeast Asia and the Cape Verde islands.


The enigmatic “pitless pitviper,” Azemiops feae or Fea's Viper looks almost nothing like other vipers, with its elliptical head, enlarged head scales, and smooth dorsal scales. In fact, it is so unusual that at times it has been classified as an elapid or a colubrid instead, of which its enlarged head scales in particular are reminiscent. Morphological and molecular evidence point to an ancient relationship between Fea's viper and other old world vipers ("viperines"), which last shared a common ancestor over 56 million years ago. Rather, Fea's viper is more closely related to the crotaline vipers, or "pit vipers", a predominantly New World clade that includes rattlesnakes, copperheads, and bushmasters (although even from these it is distinct, having diverged over 32 million years ago). Although there are a few other Asian crotalines, such as Hypnale and Trimeresurus, even these are more closely related to their New World counterparts than they are to Fea's viper, all sharing an infrared-sensitive facial pit. Indeed, Azemiops occupies a lonely branch of the snake family tree. 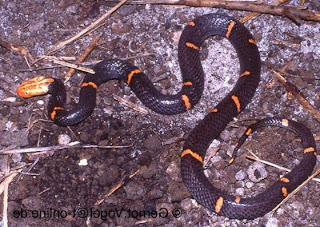 We know a little of the natural history of Fea's viper. It is found primarily in karst systems in the tropical uplands of northern Burma, northern Vietnam, and south-central China. Adults are active predominantly during cool, rainy summer nights, when they move slowly through deep leaf-litter in bamboo and tree fern thickets interspersed with well-lit clearings. They spend much of their lives in the holes and crevices of karst outcrops and in open and underground streams. Juveniles are most active on cool, wet fall nights. Like other vipers, Fea's viper hibernates in winter, so presumably they are fairly predictable in space and time when entering and leaving their hibernacula. Only a few prey items have been recorded, all of which have been rodents and shrews abundant in karst outcrops associated with swift mountain streams, although these snakes will also eat geckos in captivity.


Fea's vipers are rare and difficult to keep in captivity. In 1986, the price list for Scales & Tails Trading Company in Hong Kong offered five Azemiops feae as "White Head Vipers" for $300 a piece, the most expensive item on the list. Observations of captive individuals indicate that these snakes do not tolerate dry conditions, and develop skin problems when maintained at less than 100% humidity. Ideal temperatures are between 60 and 68°F, surprisingly cool for a reptile (but a little warmer than those preferred by Rubber Boas). In the words of one reptile keeper, they are "so boring & difficult to keep" that he sent his off to a zoo. If widely held, this sentiment may actually bode well for Fea's vipers if it renders them unlikely to become overcollected for the pet trade, especially if the low demand can be met by captive breeding. Mating behavior involves courtship of females by males and is similar to that of other vipers in most respects. Fea's vipers lay small clutches of eggs, a characteristic they share with most viperines but not their closer relatives, the crotalines.


How dangerous are Fea's vipers? Few bites have been reported, but these are described as "mild", causing few serious consequences. There are similarities between Fea's viper venom and that of viperines, especially Wagler's Temple Viper, except that Azemiops venom has no blood clotting, hemorrhagic, or muscle-destroying activity. The venom gland itself is similar to a viperine's, but Fea's viper fangs possess a ridge at the tip and a blade on the back seen only in some opisthoglyphous and atractaspid snakes. One venom component, dubbed azemiopsin, has been identified as a potential model in neurotransmitter research, adding to the pharmacopoeia of medicinally-useful compounds found in snake venom. Although discovered 125 years ago, Fea's viper has much still to teach us about evolution, neurology, and much else. Let us hope we can learn from it.

1 The genus Causus consists of six species of viper from sub-Saharan Africa commonly known as night adders. Night adders were once considered the most primitive vipers due to their round pupils and enlarged head scales, which is why Boulenger found them remarkable. They are oviparous and are now known to be more closely related to viperines than to Azemiops and crotaline vipers. Look out for an article on them up here one day!↩


Thanks to Gernot Vogel, David Nixon, and Michael and Patricia Fogden for use of their photographs.

Life is Short, but Snakes are Long by Andrew M. Durso is licensed under a Creative Commons Attribution-NonCommercial-NoDerivs 3.0 Unported License.
Posted by Andrew Durso at 9:30 AM

Thanks Mike! These have always been some of my favorite snakes (I feel like I say that on every article).

Like virtually every other reptile enthusiast, I have seen Fea's Vipers only in photographs. Oh how I would love to travel to their natural habitat to observe them in life. I look forward to your article about Night Adders.

but isn't it exciting that Burma is finally pursuing (some degree of) democratic reforms? give it a few years and maybe you can mount an expedition!

Thanks John! I think we're all right there with you.

Somehow I should have know that those were the two things you would pick up on. Thanks for bringing a geopolitical perspective to the blog - maybe I'll be going to Burma one day!

I had one of these once. Unfortunately it arrived in bad shape and i was not able to save it.