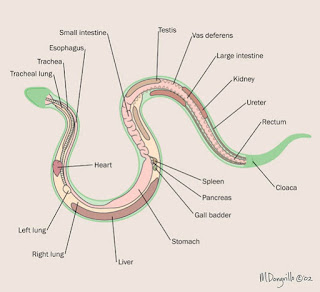 Life is Short, but Snakes are Long by Andrew M. Durso is licensed under a Creative Commons Attribution-NonCommercial-NoDerivs 3.0 Unported License.
Posted by Andrew Durso at 1:57 PM 2 comments:

It isn't often that I'm sent a photo of a snake that I can't identify, but last week Alvaro Pemartin found the time both to finish translating all of my old blog posts into Spanish (many thanks to him!) and to obtain photographs of a snake that I had never heard of before. When he sent them to me, I was struck by how beautiful and distinctive the snake was, and it turned out to be quite difficult to identify. I shouldn't have been surprised, because it is from a herpetologically-poorly-known region of the world, western Africa. Alvaro works as a doctor in Guinea, and his nurse, Sandrine Chabassieu, photographed the snake as it crawled across their porch one day.


Although Kate Jackson's new key to identifying snakes of western and central Africa is a great tool, we couldn't use it to identify this snake because we didn't have close-up pictures of the all-important scale characters that can be indispensable in identifying species of snakes. The backup method, sending the photos to as many people who might know as possible, eventually proved effective when Laurent Chirio, of the Muséum National d'Histoire Naturelle in Paris, France, wrote me that "This is without any doubt a beautiful Meizodon coronatus. I found some specimens with this kind of colour pattern in Guinea."

I wanted to learn what I could about this snake, because it was so striking and previous unknown to me. There isn't a lot out there. Meizodon coronatus, also known as the Western Crowned Snake, is one of five species in Meizodon, a genus of poorly known colubrine snakes found in sub-Saharan Africa. Western Crowned Snakes are found from Senegal to the Congo along the coast of western Africa, while the other four species are found in eastern and central Africa. The Western Crowned Snake was the first species of Meizodon described, by Hermann Schlegel in 1837, who called it Calamaria coronata in his first major published work (Essai sur la Physionomie des Serpens) as assistant curator of the Natural History Museum of Leiden in the Netherlands. The species was later moved to Coronella (subgenus "Mizodon") by Giorgio Jan of the Milan Museum in 1866, then placed in Meizodon in 1955 by Arthur Loveridge.

No genes of any species of Meizodon have been sequenced, so it's difficult to say exactly how they are related to other snakes, but if their placement in Colubrinae is correct, then they are probably closely related to other west African species of colubrine, such as the egg-eating Dasypeltis and wolf-toothed Lycodon. These snakes are descended from the same common ancestor as North American kingsnakes and ratsnakes, from which they diverged about 33 million years ago.

Meizodon are primarily predators of lizards, especially skinks, although they are also known to eat geckos, small mammals, and frogs. They are not as specialized for feeding on skinks as their relatives the wolf snakes (Lycodon), on which an upcoming article will focus, but their genus name describes their teeth, which increase in robustness toward the back of the jaw. Meizodon coronatus seem to be a diurnal foragers. A few individuals were observed foraging along the base of a crumbling wall by Godfrey Akani and colleagues at Rumueme, Nigeria. These snakes probed with their heads into holes and crevices where geckos and other lizards were sleeping. Typically, Meizodon are apparently found in refugia such as under rocks, within hollow trees, and underneath loose bark during the day. Don Broadley of the Zimbabwe Natural History Museum  recalls capturing several Meizodon semiornatus that were sheltering inside tree hollows in a flooded forest in western Botswana, along with the psammophine snakes Psammophylax and Psammophis. Broadley noted that several snakes were sometimes captured per tree, including evidence of shed skins and skeletons, although these observations might be atypical given the flooded nature of the forest at the time of Broadley's visit.

Likely viviparous, Meizodon coronatus inhabits savannahs, forests, plantations, and urban areas. They are mentioned in a study conducted by Godfrey Akani and colleagues on anthropogenic causes of snake mortality in west African suburbs. They found that anthropogenic snake mortality in suburbs of southeastern Nigeria were about 50% intentional, 50% unintentional (e.g., roadkills, snares set to trap more edible wildlife), and that more snakes were killed in the wet season, when they are presumably more active. Even though most of the snake species in this region are harmless and beneficial to humans (in that they exert strong top-down control on populations of pesty rodents, by eating them), most people did not know how to differentiate venomous from non-venomous snakes. It's interesting to know that some ecological problems are common to places as different as North America and Africa. I was glad to hear from Alvaro and Sandrine that, now that they know their beautiful snake is a harmless Meizodon, they have encouraged their camp guards not to kill other Meizodon they might see in the future.

Edit: 4-Dec-2019: In response to a claim that Meizodon are opisthoglyphous, I revisited some of the literature and found that the original description of Meizodon coronatus by Schlegel in 1837 states (p. 47):


The maxillary teeth form one continuous series; anteriorly small, they gradually become longer and stouter posteriorly; none of them are grooved.

Although the genus name Meizodon comes from the Greek words meizo ("larger" or "greater") and -don (from odonto = "tooth"), this seems to refer to a gradually increasing series rather than an enlarged rear tooth or pair of teeth. I was only able to find a single illustration of the teeth of these snakes (here and above; reprinted from Jan 1866 as part of a detailed comparison of M. regularis and M. coronatus written in 1969). Although there are opisthoglyphous colubrine colubrids (e.g. Dispholidus, Thelotornis) that can kill humans, most species, even those with enlarged rear teeth, do not possess venom dangerous to humans (although colubrid venom and its relationship to tooth anatomy is still on its way to becoming well-understood). Eventually the skull of a Meizodon will be CT scanned & posted here, but until then the single drawing from 1866 and the written descriptions are all we have to go on.


Thanks to Alvaro and Sandrine for the photos, and to Pierson Hill, Peter Uetz, and Laurent Chirio for nailing the ID.

Life is Short, but Snakes are Long by Andrew M. Durso is licensed under a Creative Commons Attribution-NonCommercial-NoDerivs 3.0 Unported License.
Posted by Andrew Durso at 9:54 AM No comments: