Why are there no herbivorous snakes?

This article is part of a series highlighting new research in snake biology presented by herpetologists at the World Congress of Herpetology VII in Vancouver, British Columbia. If you want to learn more about the WCH, check out the June 2012 issue of Herpetological Review, or follow the Twitter hashtag #wch2012, with which I will tag all posts in this series. This article was inspired in part by the research of Beck Wehrle, who did his Master's work on the microbial communities of iguanas, and by Cyndi Carter.


Herbivory (eating plants or their parts) is widespread among vertebrates. There are many herbivorous mammals: think of cows, deer, and other ungulates, as well as lagomorphs (rabbits and their relatives), kangaroos, elephants, sloths, hyraxes, manatees, and even some primates, including many humans. Many birds are herbivorous, including notably the Hoatzin of the Amazon basin, which eats only leaves, but more broadly the many seed- and grain-eating birds such as sparrows, buntings, chickadees, and many other familiar species. Among reptiles, there are herbivorous lizards (including several Filipino monitors, such as Gray's and Panay Monitors, which eat fruit, and Marine Iguanas, which eat only seaweed), turtles (Green Sea Turtles and most tortoises), and even some crocodilians (Simone Brito and colleagues reported Broad-nosed Caimans eating fruit in 2002). Nearly all frogs are herbivorous as tadpoles (and some as adults), and some salamanders, the sirenids, eat algae. There are also many herbivorous fishes: the Pacu of South America, many koi and goldfishes, parrotfishes, and some cichlids and catfishes. Notably absent, then, are the snakes.

There are over 3400 species of snakes, representing >10% of all tetrapods: more than any other group except mammals, birds, and frogs. So why are there no herbivorous species of snake?

At least part of the secret is that nearly all these herbivores (at least, those that eat leaves and parts of plants that have high cellulose content) have something in common: they don't actually digest their own food. You see, much of the energy in plants is stored in their cellulose, a polymer (chain-like molecule) of several hundred to over ten thousand glucose (a common, energy-rich sugar) molecules linked together by β(1,4) bonds. Animals cannot make cellulase enzymes to break the β bonds in cellulose and obtain the monosaccharide glucose, which they can metabolize for energy. Instead, sophisticated endosymbiotic microbes that live in their guts do it for them. The microbes and their herbivorous hosts are digestive symbionts, or indispensable partners. This poses a problem: how do newborn herbivorous organisms get their gut colonies in the first place? The answer: from older members of the same species, including their parents. The transfer is facilitated by processes like live birth, nursing, and coprophagy (eating others' poop), as well as more generally by plenty of social contact thorough pair bonding and parental care, most of which are generally not present in snakes. To be fair, about 15-20% of snakes give live birth, and some have limited parental care and are social at times. But generally speaking, opportunities for microbe transfer between snakes are few and far between. What's more, restrictions of functional morphology probably restrict snakes' ability to evolve herbivory. The kinetic skull with its highly specialized musculature and dentition for swallowing large prey would be extremely unsuitable for the mastication required to pre-digest most plant tissue. There also isn't very much space in a snake's body for the exceptionally long/convoluted gut that seems to be necessary to house the microbial fauna necessary for complete digestion of plant tissue.

It's interesting to consider what natural history attributes a herbivorous snake might share with other herbivorous reptiles. Most herbivorous lizards are social, including the Green Iguana and the Marine Iguana. Additionally, herbivory seems to be especially common among lizards on islands, where animal prey  abundance is chronically or periodically low. Predation pressure might also be low on such islands, allowing would-be ectothermic herbivores to meet their energetic demands by eating plants, digestion of which requires prolonged basking to achieve high body temperatures  which could increase predation risk. Many plants reward their herbivores with tasty fruits or nectar in exchange for seed dispersal or pollination - lizards in the Mediterranean, New Zealand, and Mauritius are plant pollinators, and there are lots of examples of mammalian, avian, and invertebrate pollinators. Is it such a stretch to imagine a snake somewhere that enters into this kind of relationship with a flowering plant?

The recent discovery of herbivory in a species of jumping spider, named Bagheera kiplingi by a Jungle Book aficionado,  means that another predominantly carnivorous group contains at least one herbivorous member. These spiders eat Beltian bodies (little packets of fat and protein produced by Acacia trees to reward their ant mutualists/defenders), although they also eat insects. Some other spiders also feed on nectar and might be pollinators. Intriguingly, members of the genus Bagheera are also unusually social for spiders. No word yet on the composition of their digestive microflora, but other plant-tissue-eating arthropods, the termites, rely on similar endosymbioses to vertebrate herbivores.

Herbivory by a snake has actually kinda-sorta been reported in the peer-reviewed literature once or twice. As far back as 1875, when French naval physician and naturalist Albert Morice wrote the first detailed account of the fauna of Cochinchina, he remarked on how often algae and fragments of aquatic plants were found in the digestive system of the Tentacled Snake, Erpeton tentaculatum. Other authors have remarked on this as well, and according to Morice's account, the local people told him that they knew the snake consumed plants. Hubert Saint Girons, writing in 1972, suggested that in the course of hunting fish in a vegetation-rich freshwater environment, parts of plants might be uprooted and swallowed with the prey. More recent herpetologists have concluded that the presence of plant debris in the stomach contents of E. tentaculatum is, in fact, probably accidental. Furthermore, because there are no  morphological modifications to the dentition or digestive system of E. tentaculatum that would suggest a herbivorous diet, there is no reason to suspect that these plants are consumed on purpose. Nevertheless, the statement that Erpeton is a herbivorous snake has been propagated in several sources, although it is not really accurate.

The more compelling case comes from a study done on island Cottonmouths (Agkistrodon piscivorus) by Harvey Lillywhite and colleagues, published in the journal BioScience in 2008. During a study of pitviper scavenging in the intertidal zone conducted on Florida's Seahorse Key, Lillywhite observed Cottonmouth turds containing relatively large amounts of seaweed (up to 54 grams, or pretty much the entire turd). This seemed like a lot of material to be secondarily or accidentally ingested, and Lillywhite speculated that the Cottonmouths might be eating seaweed because it smelled like fish. Then he and his team went further: to test this idea, they presented Cottonmouths snakes in the laboratory with marine plant materials with and without fish present. The snakes thoroughly investigated the algae lacking fish scent for several minutes, with frequent tongue flicking, pushing, and probing, but they did not attempt to ingest it. When the presentation was repeated using plant materials rubbed with a dead fish or loosely enveloping a piece of fish, the snakes voluntarily swallowed the marine plants that had contacted fish, whether or not the fish was still present. Pics or it didn't happen? Here's the proof:


I researched this topic a while ago and intended to make a post about it at some point. What reminded me was actually an experience I had while I was at the WCH: an interesting piece of evidence for a very strange kind of herbivory in a snake came to my attention. My good friend Cyndi Carter, a student of ecology at the University of Georgia, told me I had three chances to guess what she found in a Cottonmouth stomach, and that if I got it she would buy me a large ice cream. My first guess was a dead cat, which they have been known to eat. As a hint, she told me that she found it when she tried to inject the snake with formalin and couldn't get the needle in. After two more wrong guesses on my part (turtle, rock), she showed me this picture: 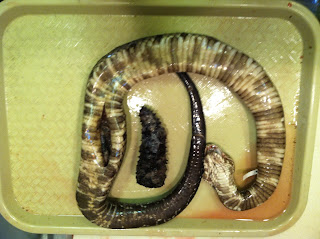 That's right, a pine cone. Can Cyndi, Joe Mendelson (whose snake it was), or I explain this? We cannot. Maybe it smelled like a fish. 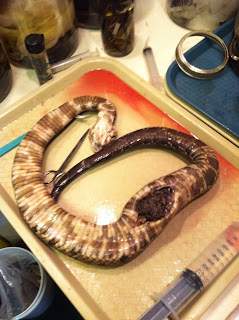 Thanks to Cyndi Carter for the picture of the pine cone, James Van Dyke for articulating what I meant to say about constraints of functional morphology at the end of the third paragraph, Joe Mendelson for clueing me in to the herbivorous frog Xenohyla truncata, and Patrick Prévost for his excellent article and  photograph of Erpeton tentaculatum, one of my favorite snakes.

Life is Short, but Snakes are Long by Andrew M. Durso is licensed under a Creative Commons Attribution-NonCommercial-NoDerivs 3.0 Unported License.
Posted by Andrew Durso at 5:41 PM 20 comments: