When most people think of boas, images of South American tropical rain forests come to mind, home to iridescent rainbow boas, brightly colored emerald tree boas, and enormous boa constrictors. Few people think of the canyons of northern Utah, which are home to one of only two native North American boas, the rubber boa (Charina bottae). Discovered in California and described by the French zoologist Henri Blainville in 1835, rubber boas range from northern Utah and western Wyoming to southern British Columbia and central California. An adult rubber boa is about the size and shape of a polish sausage, and juveniles aren’t much bigger than a crayon. A rubber boa’s leathery skin is a similar color to creamy coffee, and its small scales give it a rubbery texture. These boas have countersunk jaws to prevent dirt from entering their mouths while burrowing. Other unusual anatomical features include a vestigial pelvic girdle, similar to those of other boas, with sexually dimorphic 'spurs' (actually reduced femur bones) that males use to titillate females during mating, and a blunt tail covered in a large, shield-like scale. 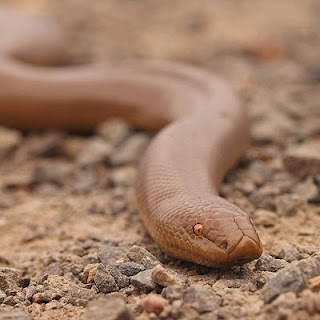 Rubber boas are active at night during the summer, as evidenced by their vertically elliptical pupils. They can be among the first snakes to come out of hibernation in the spring. In Cache County, Utah, where I live, rubber boas are found as early as March and as late as November. Rubber boas hibernate in talus slopes and deep rock crevices. Gravid females use these same habitats for thermoregulation between April and August, maintaining body temperatures around 88° Fahrenheit. They give live birth to an average of four young once every two to three years in late summer, so the survival of juveniles must be very good in order for populations to remain stable. They must also be relatively long-lived in the wild - some have lived over 30 years in captivity, and it's not unheard of for other boas to reach 40 or 50.

It’s hard to imagine these docile, slow-moving snakes as predators, but rubber boas are known to eat mammals, as well as birds, other reptiles, and their eggs. When foraging at night, rubber boas enter mammal burrows to consume litters of nestling mice, voles, moles, shrews, and pocket gophers. Rubber boas fend off protective mothers with their short, blunt tails, which often bear scars from rodent bites. The roughly contemporaneous Eocene origins of rubber boas and rodents suggest that these small boas might have been depredating rodent nests ever since they evolved, as suggested by Javier Rodríguez-Robles, Christopher Bell, and Harry Greene in their 2006 Journal of Zoology paper.

Dorcas and Peterson (1998) described six patterns of thermoregulation in rubber boas from Idaho. These snakes were active at very low temperatures for a snake: an average of 57° F. In fact, rubber boas foraging at night frequently emerged from their warm burrows into cooler air temperatures, which is very unusual for a reptile. Thermoregulation is commonplace among gravid adult females, which use rock outcrops to select temperatures optimal for their developing offspring. In cool years, no rubber boa reproduction may take place. Because they cannot forage to feed when gravid, female rubber boas might go for up to 18 months without eating.

Listen for a shortened version of this post to be read on Utah's NPR segment Wild About Utah!

Thanks to photographers Todd Pierson, Karen Petersen, and Anna.

Life is Short, but Snakes are Long by Andrew M. Durso is licensed under a Creative Commons Attribution-NonCommercial-NoDerivs 3.0 Unported License.
Posted by Andrew Durso at 6:53 PM