By now, all of us herpetologists have heard quite enough 'Snakes on a Plane' jokes, thank you very much (they're second only to jokes about how we probably study STDs - never heard that one before). Meanwhile, in reality, snakes have been flying - well, gliding, really - since long before Samuel L. Jackson had had it with them.

True flight, actively wing-powered and sustained for lengthy periods of time, has evolved only four times (in insects, pterosaurs, birds, and bats). In contrast, gliding flight (defined as falling at an angle more shallow than 45° from horizontal) is more energy efficient and has evolved many times, and many birds use both gliding flight and true flight depending on the circumstance. Among the vertebrates are found gliding lemurs, squirrels, fishes, frogs, lizards, ants, squids, and of course snakes. Of all the groups that have evolved gliding, snakes would seem to be the least likely candidates, because of their long, cylindrical body that seems ill-suited for flight. But evolve to glide they have. Many gliding groups live in the rainforests of Asia, especially on the island of Borneo, where the trees are very tall and widely spaced, and southeast Asia is where you will find the five species of gliding snake, genus Chrysopelea.

As with many species native to this region of the world, there are a lot of unknowns about gliding snakes. We don't know very much about how they spend their time in the wild, what they eat, or what eats them. Until recently, relatively few scientific papers had been published on Chrysopelea, including a note on their flight in 1906.1

Jake Socha, a comparative biomechanics researcher at Virginia Tech, studies the gliding flight of Chrysopelea. For his PhD at the University of Chicago, he characterized their mechanism of takeoff, the postures they adopt while gliding, and contributed substantially to our knowledge of their morphology. Socha and colleagues used multiple synchronized video cameras to film and digitally reconstruct the trajectory, speed, and body posture of gliding Chrysopelea, which they frightened off a three-story scaffolding built with a branch sticking out of the side, to simulate a tree. The videos showed that the snakes could descend at a very shallow angle of 13°, comparable to flying squirrels and other accomplished gliding vertebrates.

Next, Socha and colleagues looked for relationships between measures of the snakes' flight performance, such as glide angle and horizontal speed, and morphological characteristics of the snakes. They found that smaller snakes were better able to glide long distances than larger ones, and that the wave amplitude of the snake's body was a more important predictor of flight behavior than its wave frequency, the latter of which they hypothesize helps maintain stability during flight.


In order to transform their bodies from fairly non-aerodynamic cylinders into a more aerodynamic wing-like shape that generates lift, Chrysopelea can flatten their body by extending their ribs, an observation first made by Robert Shelford (also the first person to document their gliding behavior, in 1906). The flattening process proceeds from anterior to posterior, does not include the tail, and takes only 100–350 milliseconds to complete. Although the exact mechanism of rib expansion has not been examined, it is presumably similar to that used by cobras to spread their hoods. Because the rib muscles are also involved in breathing, it is likely that Chrysopelea cannot breathe when gliding, which could physiologically limit the duration of their glides.


Finally, Socha and colleagues have investigated Chrysopelea's take-off behavior in great detail, using the same synchronized camera set-up they used to film the snakes in flight. I won't go into excruciating detail (you can read the whole paper here), but you can get an idea of the movements involved by looking at the beautiful images produced below. 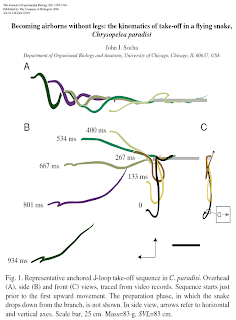 So far, the five species of Chrysopelea are the only known gliding snakes, although anecdotal reports suggest that their close relatives, the Bronzeback Snakes in the genus Dendrelaphis, are also capable of making gliding leaps. Although Chrysopelea have been known since the time of Linneaus (who described only their color, as "green, with a yellow line on both sides"), we are still learning about them today, and will probably never know all there is to know. In addition to having a fascinating natural history, these snakes are also incredibly graceful and beautiful. I think I would like to see one in the wild more than just about any other snake, which is always a bold statement to make. One day...


1 The author, Robert Shelford, was brought dead specimens of Chrysopelea in the late 1890s by Dyak villagers in inland Borneo, who told him that they were of a flying species. Skeptical, he obtained some live specimens and tested them by dropping them from heights of 15-20'; "after one or two false starts the snake was felt to glide from the experimenter's hands".

Thanks to photographers Angi Nelson and Jake Socha. If you have more questions about Chrysopelea, check out Jake Socha's Chrysopelea FAQ.

Life is Short, but Snakes are Long by Andrew M. Durso is licensed under a Creative Commons Attribution-NonCommercial-NoDerivs 3.0 Unported License.
Posted by Andrew Durso at 12:57 PM

As always, loved the article!

Nice article. You are absolutely right, Chrysopelea spp. are some of the most beautiful and graceful snakes. I've been lucky enough to see them in the wild.

Very cool! May I ask where?