I've mentioned before how snakes can eat nearly anything, due to amazing adaptations of their head and jaws that allow them to swallow objects bigger than their heads. But surely they must be limited to eating prey that are shorter than they are in overall length, right? What about items that are just a bit longer?

There are a wide variety of snakes that eat other elongate vertebrates, including other snakes, legless lizards, lizards with relatively small legs (like skinks), amphisbaenians, caecilians, and eels (today we'll focus on snakes, but look out for future articles on some of these other specialized diets). In many ways, this kind of diet is convenient for a snake, because they are already elongate, so they don't have to deform their stomachs, bodies, and mouths to the same extent as snakes that eat bulkier prey. Many are relatively primitive snakes that retain the robust skulls of their lizard-like ancestors, but quite a few derived snakes are snake-eaters as well, including the King Cobra, Ophiophagus hannah, the world's largest venomous snake.

Other familiar snake-eaters include the North American Kingsnakes (genus Lampropeltis), which have evolved resistance to the venom of many species of viper. Eastern Indigo Snakes (Drymarchon couperi) and their Central and South American relatives are also frequent snake eaters, and many other species of North American colubrids sometimes dine on each other, including Racers (Coluber constrictor), Coachwhips (genus Masticophis, now sometimes included in the racer genus Coluber), Garter and Ribbon Snakes (genus Thamnophis), and Coral Snakes (genus Micrurus). Among their prey are many of North America's venomous snakes, including the Copperhead (Agkistrodon contortrix), Cottonmouth (or water mocassin, Agkistrodon piscivorus), and many species of rattlesnake (genera Crotalus and Sistrurus), as well as many non-venomous species of snake. Because all snakes are predatory, the existence of snake-eating snakes implies that some snakes are feeding at a very high trophic level indeed, and indeed they may represent top predators in some ecosystems.

Just how does a snake accomplish eating another? It is an arduous process, especially when the prey snake is as long as or longer than the predator. It's true: some snakes are able to ingest other snakes that equal or exceed their own body length. That means that these snakes must fit an object longer than their entire body into just their stomach, which (perhaps it goes without saying) is not as long as their whole body. The prey must be fit into the stomach, and cannot extend into the intestine or the esophagus, because the lining of the stomach is the only part of the digestive system that secretes digestive enzymes.

Body width is not nearly as much as a problem - snakes have highly kinetic skulls and very strong and flexible trunk muscles, so they can both expand their body cavity and compress their prey in order to accommodate very wide meals. But there is a limit to the length of their gut - it cannot extend into their tail, which is solid with muscle, nor can the prey easily be left hanging out of the mouth, where it could impede the snake's movement, interfere with sensory processes, or begin to decompose.

As determined in a paper by one of my favorite herpetologists, Kate Jackson, the author of the popular herpetological book Mean and Lowly Things, the solution hit upon by North American Kingsnakes seems to be to throw the prey into waves to decrease its length and pack it into the space available. They accomplish this by concertina-like motions of their own vertebral column, which causes the (dead) prey snake's body to conform in shape to that of its predator. The predator snake can then straighten out again while advancing its jaws, so that the standing waves were left in the body of the prey snake. As you can see from the below X-ray images, taken from Jackson's paper with  functional morphologists Nathan Kley and Elizabeth Brainerd, this allows the predator snake to pack pretty long snakes into its gut. It's the same principle as meandering your path increases the total distance you walk without affecting the straight-line distance from your starting point (in this case, the snake's mouth) to your finishing (here, the posterior end of the snake's stomach). Kingsnakes tested in Jackson et al.'s paper were able to ingest Cornsnakes (Pantherophis guttatus) up to 139% of their body length and up to 135% of their pre-feeding body mass, which would be like a 6'0", 175 lb. person eating an 8'4", 236 lb. meal - in one bite. Without using their hands. 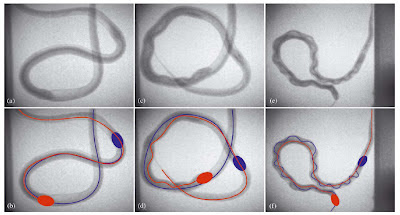 As the prey snake is digested, a decrease in wavelength and increase in amplitude of the waves of the prey snake’s vertebral column takes place, because the prey snake's body becomes more compressible as its tissues are digested off. In Jackson's experiment, it took the Kingsnakes about 7-10 days to completely digest these huge meals (although a few of them regurgitated their prey after a couple days).

Once, I was lucky enough to observe a young racer that had just eaten a Ring-necked Snake (Diadophis punctatus) at a nature preserve in east-central Illinois: 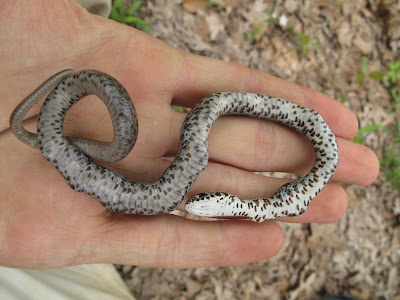 As you can see, she was pretty much catatonic. The Ring-necked Snake she had eaten was 26.5 cm in length, and she herself measured only 28.9 cm, so her prey was >90% of her total length! You can really get an impression from this photo of the lumpy, kinked quality of the body of a snake that has recently eaten another, caused by the waves of the prey snake's body inside the gut of the predator.

Edit: an observation published in 2015 showed that mudsnakes, which eat large, elongate prey such as sirens and amphiumas, also push their prey's vertebral columns into waves in order to fit them into their guts.

Thanks to Belinda Wright for the photograph of the King Cobra.

Life is Short, but Snakes are Long by Andrew M. Durso is licensed under a Creative Commons Attribution-NonCommercial-NoDerivs 3.0 Unported License.
Posted by Andrew Durso at 6:23 PM

On a side note, that snake the cobra is eating looks a lot like a coachwhip.

That's a good point, probably. I think Dave Cundall has shown that the same strategy is used by snakes that consume amphisbaenians and caecilians.

I agree, and if it was taken at a zoo, it could be. In the wild, of course, it could be almost anything - maybe a Ptyas?

It is, you should check it out

This is a cool site. I also love snake. I hope I can see more pics and learn more about snakes.
Can you send me weekly of your blog post about snakes?
Thanks..

Thanks! You can subscribe by email using the link at the bottom of each article.

cool and scary. saw this in national geographic. May I have your permission to reblog your article but citation under you?

Certainly! Thanks for reading!

I just posted a link to this on Face Book, in answer to a friend who kills any snake she sees. Why destroy a King snake when he could be destroying your real enemy, the venomous Rattler. Thanks for writing this informative, interesting article.

Janet, thanks for the kind words and for encouraging your friend not to harm kingsnakes. It's also important to remember that rattlesnakes are not our enemies either, and that the vast majority of rattlesnake bites happen when someone is trying to kill a rattlesnake.

Very enlightening. It perhaps sheds some light on the sighting I had a few weeks ago of a Chinese cobra eating another cobra which appeared to be roughly the same size. Many people have asked me how common this is for a cobra eating another of its own kind and perhaps you can comment.
If you're interested in seeing the photos I took of the incident, you can find them here: www.flickr.com/photos/bobhawley/13781824504/

Whoa, great shot Bob! Yes, I think it's common for King Cobras to eat other large snakes, including other cobras. Their genus name, Ophiophagus, means 'snake-eater'.

I saw three gopher snakes tangled in a net in my garden today (I'm sorry and I've removed the net). One was starting to decompose, the second one dead but not for so long (and cut in half, couldn't find the other half) and the third one tangled and not dead. I also saw a king snake nearby. I was wondering whether they all came for the first one? Or for the rats (we just had somebody to put out traps in the house a couple of days ago)? Up to this point I had never seen a snake around the house (the net's been up for 1.5 years). Any suggestions welcome!

Yeah, that netting can really entangle snakes badly. It's hard for me to say exactly why they were all there, but it's a good time of year for snake activity. If you think of that net as kind of like a snake trap, it's possible that it inflated your perception of their abundance - it wouldn't surprise me if you don't see another snake all year, even if there are more around. It also seems likely to me that if you have lots of rats, both bullsnakes and kingsnakes might be attracted to your yard. Unfortunately, the loss of those two bullsnakes might mean that your natural rodent control is reduced somewhat. Hard to say if the tangled snakes attracted the kingsnake. Scavenging in snakes is unusual, but it has been documented.

I like your post. In other words, there are several types of snakes exist in plant. And all are reptiles. So all snakes have several ways of moving about. The most common way is to throw their body into loops and move forward by pressing against anything solid.

Oh! Good to know about that

In the United States alone there are over 20 different sub-species of rattlesnakes, not to mention coral snakes, copperheads, and water moccasins, depending on what part of the country you're in, or traveling through. Click here