Pelagic Sea Snakes and the animals that live on them

This overdue post was inspired by the symposium ‘‘New Frontiers from Marine Snakes to Marine Ecosystems’’ presented at the annual meeting of the Society for Integrative and Comparative Biology, January 3–7, 2012 at Charleston, South Carolina, and featured in a special issue of the journal of the same name.

I've written before about some of the amazing aspects of sea snake biology. From the morphological and physiological to the behavioral and reproductive, few sea snake adaptations cease to amaze. But one topic I had never before considered was marine snake parasitology. I knew that the skin of whales, the shells of sea turtles, the hulls of ships, and other mobile pelagic surfaces often serve as a substrate for smaller, more sessile marine organisms, such as barnacles, collectively known as epibionts. In fact, I recently learned that the total weight of all the barnacles on a single Gray Whale can exceed seven hundred pounds and that these barnacles serve as homes for other, more parasitic hitchhikers such as whale lice. But I had never heard of marine reptiles other than sea turtles harboring parasites.

I was surprised to learn that many marine snakes play host to epibionts. Twenty-eight of the ~65 species of sea snake have been documented to harbor at least one kind of epibiont. But one species, the Pelagic or Yellow-bellied Sea Snake (Pelamis platurus [sometimes platura]), harbors more kinds of epibionts than any other. In order to understand why, it is helpful to know that Pelamis platurus is found farther out in the open ocean than any other kind of sea snake. Most species of sea snake stick relatively close to reefs and shores in the Indian and Pacific Oceans, but Pelagic Sea Snakes are found from the east coast of Africa across the tropics to the west coast of the Americas. They are the only exclusively pelagic marine snake, meaning they live near the surface of the ocean but far away from land, and their distribution spans more than half of the Earth's circumference, making them the most widely distributed snake on Earth.

Although there is some debate about the amount of intent used to get there, Pelagic Sea Snakes sometimes congregate around calm areas where ocean currents converge, ("slicks"), where flotsam, debris, and pelagic organisms are often concentrated. By one 1519 explorer's account, Pelagic Sea Snakes were "innumerable" along one such slick on the west coast of Costa Rica. Pelagic Sea Snakes are "float-and-wait" predators, meaning that they passively drift in the water waiting for fishes to come near. A similar strategy is used by many terrestrial snakes, such as vipers and large pythons, except that in the open ocean, many fishes probably approach purposefully, meaning to take shelter beneath the seemingly inanimate snakes. The snakes then strike sideways or by swimming rapidly backwards. Their venom, like that of most sea snakes, is made up of only one or two exceptionally potent compounds, unlike the complex venoms of most terrestrial snakes. Partially as a result of their biodiverse habitat and immobile foraging behavior, Pelagic Sea Snakes play host to a diversity and abundance of epibionts almost twice as great as that of any other kind of sea snake.

Most marine snake epibionts are invertebrates. Barnacles are ubiquitous, and familiar marine creatures such as crabs, shrimp, snails, and oysters are also found living on sea snakes, alongside more obscure marine animals such as hydrozoans (hydras) and bryozoans ("moss animals"). Polychaete worms and ticks round out the epibiont fauna, and algae, diatoms, and a type of protist called foraminiferans ("forams" for short) represent a sort of flora, although none of these organisms are true plants. Most amazing to me are two chordates, a tunicate and a clingfish, that were recently documented as epibionts of Pelagic Sea Snakes. Tunicates, also known as sea squirts, are marine filter feeders that have a sac-like body structure as adults. Tunicate larvae are free-swimming and resemble tadpoles, but at metamorphosis an adhesive disc on their "head" transforms into a stolon, or "foot", which they use to cling to a rock or, in this case, a sea snake. The pelvic fins of clingfishes are modified into a sucking disc, which they use to hold onto their snake hosts. How they avoid being eaten, I do not think anyone knows yet.

In order to keep this menagerie under control, Pelagic Sea Snakes shed frequently. On average, a Pelagic Sea Snake will shed its skin once every three weeks, whereas most other snakes go for one to two months between sheds. Additionally, while in most snakes the frequency of shedding decreases with age, it remains frequent into adulthood in Pelagic Sea Snakes. Because the open ocean is devoid of surfaces against which to rub to facilitate shedding, Pelagic Sea Snakes use a behavior known as "knotting" to initiate the process and to remove the shed skin and any associated epibionts. You can see a good example of knotting behavior in this video of a captive Pelagic Sea Snake:

Why do so many animals live on Pelagic Sea Snakes? One explanation may be the protection associated with settling upon one of the world's most venomous serpents. Pelagic Sea Snakes are not eaten by most seabirds or fishes (although naïve Atlantic fishes will consume them, and sometimes die from it) and so neither are their epibionts. Perhaps natural selection has favored the crabs, barnacles, and tunicates that live on sea snakes over those that land on more palatable substrates. Furthermore, the complex interplay among various members of the sea snake epibiont community may allow more species to coexist there. For instance, predatory epibionts such as larval crabs may benefit the sea snakes by controlling populations of other, more detrimental epibionts, such as barnacles, which probably slow or block the update of oxygen by the snake's skin during long dives.

Thanks to William Flaxington, Hung-Jou Chen, Chayajit, and Stuart Jackson-Carter for their photos and digital illustrations, and to Joe Pfaller for answering my questions about sea snake epibionts.

Cetacean photographer Eduardo Lugo captured this image of a Pelagic Sea Snake being pushed up out of the water by a dolphin, almost as if it was riding on its back: 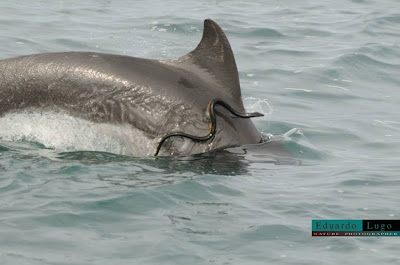 Perhaps Pelamis is heading towards a lifestyle as a dolphin epibiont? Lugo says they were swimming with the dolphins from a Wildlife Connection ecotour boat when the dolphins decided to play with the snake.

Life is Short, but Snakes are Long by Andrew M. Durso is licensed under a Creative Commons Attribution-NonCommercial-NoDerivs 3.0 Unported License.
Posted by Andrew Durso at 7:03 AM

Years ago (1959-1960)I (with William Duellman)found a dead Pelamis washed up on the Pacific coast of Mexico. It had a huge bouquet of large barnacles (Goose neck barnacles?) attached to its body. We couldn't determine if they attached before or after the death of the snake, but it wouldn't have survived long if they managed to attach while it was still alive.

The one Pelagic Sea Snake that I have ever found was washed up, (still alive) on the beach in Puerto Vallarta, Mexico. It was very sluggish and had two Goose-necked Barnacles attached to its neck. I removed them and put the snake back in the water. It revived immediately and swam away.

Sounds like you guys had similar experiences. I was in Puerto Vallarta as a kid, but I didn't know there were sea snakes there at the time or else I would have been doing nothing else but looking for one.

You can learn more about epizoic bryozoans that live a challenging life on sea snakes at:

Thanks Marcus! I can't believe I completely missed this paper during my research for this piece.

Great post as usual, Andrew! I leave for Baja Sur tomorrow and I'll be keeping a sharp eye out for Pelamis.

Thanks Mike! Best of luck.