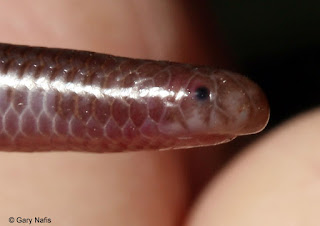 Life is Short, but Snakes are Long by Andrew M. Durso is licensed under a Creative Commons Attribution-NonCommercial-NoDerivs 3.0 Unported License.
Posted by Andrew Durso at 8:13 AM

Fascinating natural history story...thanks for digging it up.

Thanks! I learned about it for a paper I wrote in college and always thought it was amazing.

Wow! I had never heard of this! Thanks for the post!

You're welcome! Thanks for reading!

Every once in a great while I am thankful for blogging. This is one of those times.

Great post. I had never heard of this. It's not clear to me or to the the authors that the owls are intentionally preserving the snakes for this purpose. It would be awesome to do more work on this and find out if 1. the owls are catching the snakes as prey or for the mutualism, and 2. if similar behavior occurs with other species--for instance other owls and blindsnakes in the tropics.

Andy, I completely agree - and surprisingly, this study has not been followed up that I could find. It seems like ideal raw material for the evolution of a true mutualism, doesn't it? One telling detail that the authors placed in their paper was that most snakes caught by adult owls are killed before transporting them back to the nest, yet the authors observed adult owls flying with live blindsnakes in their bills.

Many tropical blindsnakes seem to be at least partially arboreal, and there is so little known about them that I'd be willing to bet there are other such interactions, but what they are is anyone's guess.

Testing the first question would be a challenge. But the fitness consequences for the owls are pretty large so you would predict that this behavior could be selected for. One idea that comes to mind (perhaps infeasible) is to transplant screech-owls from other populations outside of the range of blindsnakes to this part of texas to see if they do the same thing. If not it would be stronger evidence that the Eastern Screech-Owls in this situation are intentionally doing this. Also you could track individuals and see if offspring raised by parents who do this also do this kind of behavior. Lots of fun long-term project ideas. This is the kind of story that used to most fascinate me when I was a little kid.

Definitely, me too. Great ideas. Since these observations were made 30 years ago, it would be of some interest even to go back to these sites and see if the same interaction is still taking place there today.

of course just knowing that blindsnakes even exist is almost more amazing!

Thanks P. Does Miles have anything else to say? "Come back soon? *hump hump*", perhaps?

Many years ago I was a field tech on a bird nest box project in central Venezuela (green-rumped parrotlets), and we fairly regularly found small snakes in the nest boxes. I think they were a Leptodiera (cat-eyed snake). I never got a sense that the birds objected, but it also did not seem frequent enough for me to suspect the parrotlets were encouraging the process.

Thanks Alan. I doubt Leptodeira are eating bugs that bother the parrotlets, but that's a very interesting observation.

Excellent! I've heard of this, but never in such detail.

Very Interesting observation.
1 question I have:
why doesn't the blind snakes escape/leave the nest ?
Is it because they are injured and cannot move and hence stay for few days ?

As its not the natural habitat - I expected it to move out.

I think the blindsnakes do eventually leave the nest, but in fact an owl nest that's dark, warm, and full of bugs isn't very different from where blindsnakes like to spend their time under the ground/in ant mounds, so they're probably pretty happy there (at least until the owlets fledge & the parents stop bringing food and thus fresh sources of bugs). It does seem that sometimes the snakes are injured, killed, or fed to the young, but that this is less common than them surviving uninjured. Good question! I don't think there has been much follow-up research on this fascinating topic.