Snakes of Western and Central Africa

West-Central Africa is, herpetologically, a little known region of the world, although the herp biodiversity there is high. My friend Kate Jackson is one of the few herpetologists to have worked in the region, which you can read all about in her book Mean and Lowly Things. Recently I learned that, in the course of her fieldwork in the Congo, Kate was the first person to photograph a live Bothrolycus ater (Günther’s Black Snake), a rare species of lamprophiid known from only a few specimens collected in Cameroon, Equatorial Guinea, Congo, and Gabon. I was all ready to do a whole post about Bothrolycus when I learned that Darren Naish over at the wonderful blog Tetrapod Zoology had scooped me! This is the first time this has happened because, as Darren has repeatedly pointed out, there are far too few popular snake articles out there.

But I thought I would take an opportunity to highlight some new resources that are becoming available on west African snakes, in part because a new partner of Life is Short but Snakes are Long, Dr. Alvaro Pemartin, is a Remote Site Doctor working in Guinea. Dr. Pemartin wrote me last week to offer to help translate my articles into Spanish so that they might reach a wider audience. Many many thanks to him for this generous offer! Coincidentally, for people like Dr. Pemartin working to treat snakebite in west-central Africa, Kate Jackson and her students have unveiled a new key that can be used to identify snakes in this region to genus using characters like those I highlighted in my snake sheds post in order to determine the proper kind of antivenom to use. A companion book, Snakes of Western and Central Africa, by Jean-Philippe Chippaux and Kate Jackson, will be available in 2013 from Johns Hopkins University Press (including chapters reviewed by yours truly).

Snakebite is a serious health issue in parts of the developing world, but in North America, it's really a very minor issue. Treatment has advanced to the point where a venomous snakebite, while unpleasant and to be avoided at all costs, is no longer life-threatening unless you are immune compromised. About 5 people a year are killed by venomous snakes in North America, on the order of the same number killed by fireworks. Far more people are killed each year by almost any other cause of death you care to name. Snakes bite people in defense, not in offense. Experiments have shown that venomous snakes 'meter' their venom, often electing not to inject any when biting defensively, and that they often don't bite at all unless severely harassed first. This makes sense, since snakes need their venom to incapacitate their prey and don't want to waste it on predators. The best way to avoid venomous snakebite is to avoid initiating contact venomous snakes. You can be sure that they will avoid you. In case you're afraid of snakes, check out this PSA from The Orianne Society highlighting the many ways snake venom is used to make pharmaceuticals and treat heart attacks, strokes, and cancer; it might make you feel differently. 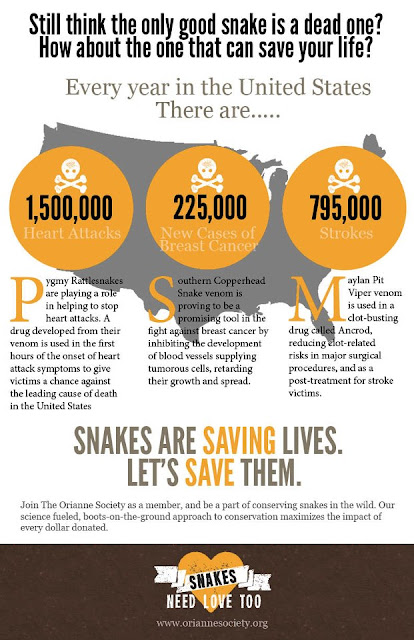 Today only, donations to the Orianne Society will be matched.

Thanks to Kate Jackson for her photos.

Life is Short, but Snakes are Long by Andrew M. Durso is licensed under a Creative Commons Attribution-NonCommercial-NoDerivs 3.0 Unported License.
Posted by Andrew Durso at 8:57 AM

Thanks a lot the for the acknowledgement but this blog and its devotion to spread knowledge about snakes and its commitment with snakes conservation deserves my little effort..

Alvaro, I calculate that your donation of time translating these posts more than doubles the number of people to whom they are accessible (360 million native English speakers + 407 million native Spanish speakers) and furthermore is a service that I could never afford to have done otherwise.

I am enjoying this blog very much. I have only recently found the nature blog network website, and it has been a pleasure exploring the exceptional reptile related works here.

Thanks! I only joined NBN recently.

I'm a public health researcher working in Central Africa Republic. Recently, I've come across two snakes I was hoping to get help identifying. If I sent a a photo, would you mind having a look? Thank you!